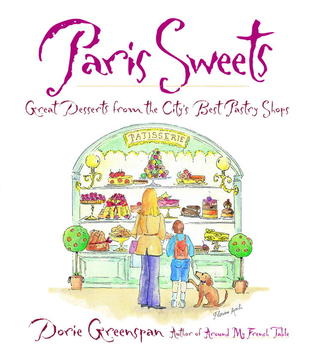 The prize-winning author of Baking with Julia (more than 350,000 copies sold), among other cookbook classics, celebrates the sweet life with recipes and lore from Paris's finest patisseries.

Like most lovers of pastry and Paris, Dorie Greenspan has always marveled at the jewel-like creations displayed in bakery windows throughout the City of Light. Now, in a charmingly illustrated tribute to the capital of sweets, Greenspan presents a splendid assortment of recipes from Paris’s foremost pastry chefs in a book that is as transporting to read as it is easy to use.

From classic recipes, some centuries old, to updated innovations, Paris Sweets provides a sumptuous guide to creating cookies, from the fabled madeleine to simple, ultra-buttery sables; tarts, from the famous Tatin, which began its life as an upside-down error, to a delightful strawberry tart embellished with homemade strawberry marshmallows; and a glorious range of cakes–lemon-drenched "weekend cake," fudge cake, and the show-stopping Opera. Paris Sweets brims with assorted temptations that even a novice can prepare, such as coffee éclairs, rum-soaked babas, and meringue puffs. Evocative portraits of the pastry shops and chefs, as well as information on authentic French ingredients, make this a truly comprehensive tour.

An elegant gift for Francophiles, armchair travelers, bakers of all skill levels, and certainly for oneself, Paris Sweets brings home a taste of enchantment.

The Real Thing: Lessons on Love and Life from a Wedding Reporter's Notebook

Your Beauty Mark: The Ultimate Guide to Eccentric Glamour

Jamie at Home: Cook Your Way to the Good Life

Called a culinary guru by the New York Times, Dorie Greenspan is the author of the James Beard Awardwinning Baking: From My Home to Yours, which inspired the creation of the online baking community Tuesdays with Dorie. She has been passionately involved with French food for the last three decades. With Pierre Herm, she wrote Desserts by Pierre Herm, winner of an IACP Cookbook of the Year Award, an