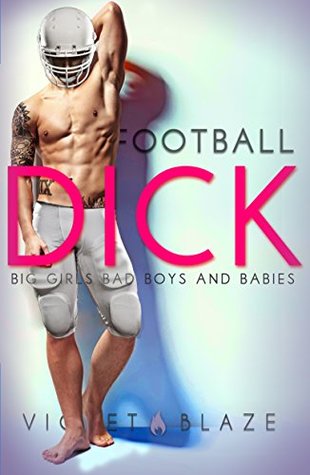 Why on earth would any woman want to win a date with Rhoden Richards, the star quarterback of the NFL's Arcata Adders?

He's a complete and total d*ck with a stupid (and totally inappropriate) nickname. Besides, we've all heard the rumors about the women and the parties, all seen his outrageous victory dances on the field. He's close enough to getting kicked off the team without adding yet another scandal to his roster.

An affair with the daughter of the team's owner would rank pretty high on that list.

Especially if she was already engaged (against her will) to the man her father would sell the team to.
Or if he got her pregnant.
Especially that.

Della Garland is the daughter of corporate giant CEO, Reuben Garland, the owner of the NFL team, the Arcata Adders. When she inadvertently ends up winning the grand prize for a charity event, she finds herself on a date with one of the hottest players in football—and in the bedroom. Rhoden Richards is an animal of a man with an enigmatic smile and a back etched in tattoos, a bad boy that Della can't help but be drawn to.

But Della's father has other plans for her, plans that will not only keep the family fortune from falling apart, but that will also keep Rhoden from losing his place on the team. When her promised fiancé buys the Adders from Della's father, they both find themselves at risk of losing everything.

Rhoden knows he should let Della go, but he doesn't know about the pregnancy she's hiding from all of them. If he did, would he be able to walk away from the only woman he's ever loved?
Della knows she should tell Rhoden about the baby, but bad boys don't change, and a child is forever. She could keep the secret to herself and stay with her soon-to-be husband … or she could take a chance.

***This is a stand-alone novel with a happy ending and an outrageously sexy football player. If you like your naughty stories with a sprinkle of humor and a kick-butt heroine who falls for strong, confident alpha males, pick this one up and get ready to take a cold shower after!***

One of his hands slides along the side of my face, fingers tangling in my hair as he holds me against him, taking his time and savoring my mouth like he did at the masquerade party. It turns me on, the way he moves, slow and confident like he's got all the time in the world. Out here, in the gentle violence of the waves, my body shaking from the cold, it feels like we should rush our way through this—whatever this is. But we don't. Rhoden kisses me like we're in a black and white movie, all deep and romantic and sure, but also like he's hiding chili peppers under his tongue.

A hot tingling drags through me, warms me up and makes me forget all about the salty sting of the ocean. Behind the distant murmur and lap of water, the sound of the music drums out a steady, solid beat, relaxing my pounding heart to its rhythm.

To The End (Hannaford Prep #4)