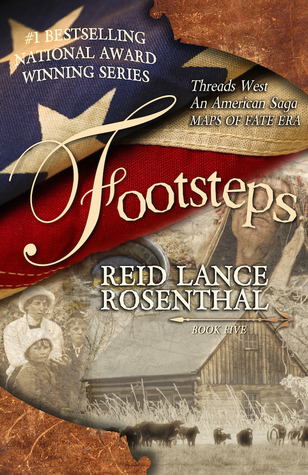 The Adventure and Romance of America, her people, her spirit and the West. This is our story.

Fifth novel of the Threads West An American Saga series--compared by reviewers, authors and readers to Lonesome Dove, Centennial, Louis L'Amour (with steam) and called by some the “Gone with the Wind of the West” and “rings true and poignant, as authentic and moving as Dances with Wolves”. The multiple #1 bestselling series—winner of fifteen National Awards, (including Best Historical Fiction, Best Romance, and Best Western)—bursts with the adventure, romance and promise of historical America and the West.

This epic saga begins in the spring of 1854. America draws individuals and families from all corners of the earth with the promise of land, freedom, self-determination and economic opportunity. Immigrants exchange the lives they know for the hope and romance of a country embarked on the course of greatness. The nation is on the cusp of her great westward expansion, reluctantly on the threshold of becoming a world power.

One thousand miles to the west of booming St Louis—gateway to the frontier—is the lawless, untamed spine of the continent, the Rocky Mountains. The power of their jagged peaks, rugged territories and vast resources beckon the souls of a few adventurous men and women, the vanguard of five generations of diverse and vibrant Threads West characters, love and struggle in the beautiful but unforgiving landscape of the West.

The brave, passion-filled personalities of Threads West; Book Two, Maps of Fate; Book Three, Uncompahgre; and Book Four, Moccasin Tracks, struggle with internal and external conflicts as they journey across and strive to establish life in this unknown wilderness.  They are swept unknowingly into the tumultuous vortex of momentous changes shaping the United States and the West pre-Civil War. Secret maps, hidden ambitions, and magnetic attractions inherent in lives forged by the conflicting fires of love and loss, hope and sorrow, life and death, shape their futures and the destinies of their lineage.  The dark stain on the pages of American History known as the “Indian Solution” begins to manifest, threatening bonds between uncommon cultures years earlier.  Love, passions, and jealousy erupt, threatening the fabric of unity between friends formed and lovers.

In Book Five, Footsteps, the offspring of the vanguard of Threads West characters are coming of age under the protective wing of the savvy, courage and fast guns of their Uncompahgre Valley rancher parents. Farms and villages flourish under steady Mormon hands in the Cache Valley, but bitter enmity flares between those settlers and the Northern Ute.  America is in transition, the lives of these brave men and independent women and the maturing first American generation shaken by events they cannot foresee. The Sioux and the Ute realize many of the tide of white men have no respect for Indian lands or culture, and desperately seek some means to save their traditions and secure the safety of their children.

On the front range of the Rockies, newly spawned Denver City - built on the banks of Cherry Creek - booms with the impact of gold discovered in the Pikes Peak area and the Ouray, San Juan and Uncompahgre mountain ranges. The Civil War erupts, the flames of deadly tumult sweep west and the remote fringe of the frontier falls into virtual anarchy. Loves are strained and families anguished as new passions ignite while older flames flicker.

The decades of the Maps of Fate era novels of the Threads West book series become the crucible of the American spirit. This violent but magical period in American history will affect forever the souls of generations, the building of the heart of the nation, the destiny of a people, and the relentless energy and beauty of the western landscape.

You will recognize the characters who live in these pages. They are the ancestors of your friends, your neighbors, your co-workers, and your family. They are you. They are us.

This is not only their story. It is our story.

Daniel Feels Left Out That Way Again Les Sauvages, tome 3 A Morgan for Melinda The Ophthalmic Assistant: A Guide For Ophthalmic Medical Personnel Mr. Right Now The Crate: A Story Of War, A Murder, And Justice A corrupção da inteligência: intelectuais e poder no Brasil Footsteps Fausta Borja's Beauty and the Beast

Reid is fourth generation land and cattle, a rancher, and a multiple #1 bestselling author whose works have been honored with fifteen national awards. His cowboy heart and poet’s pen capture the spirit of the western landscape and its influence on generations of its settlers. His long-standing devotion to wild and remote places and to the people—both past and present—who leave their legend and